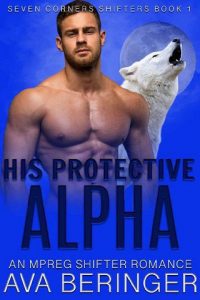 The last thing I want is to run from my past straight into my fated mate.

Omega wolf Rashad Hall is running. He’s looking for a safe place to start over again, and the last thing he wants is an alpha. When he steps into Seven Corners and immediately scents “mate,” he’s fighting against his most basic impulses. He’s supposed to seek Bronx Bolder, lead alpha wolf, for permission to stay on his territory. Instead Rashad trespasses, courting disaster, but he’s irresistibly drawn the strong, tempting, in-control alpha, knowing Bronx is his fated mate. Rashad doesn’t know how to let go of his fears. What if Bronx really is the perfect alpha for him?

Alpha wolf Bronx Bolder is done looking for love. He hasn’t found an omega strong enough to stand by his side, and he’s tired of looking. When he discovers omega wolf Rashad has started a small successful business on his territory, Bronx starts out feeling irked but soon comes to admire Rashad’s fighting spirit. When he realizes they’re fated mates, it’s easy to fall in love- and into bed- with the alluring, mysterious omega. Rashad pulls Bronx close, then pushes him away. Rashad’s keeping a lot of secrets, including that their tryst has resulted in a pregnancy. When Rashad’s past comes back to bite him, can Bronx protect him and the new life in his womb?

What’s Rashad running from? How will his past come back to haunt him? Can Bronx help his fated mate overcome his fears for a chance at true love?