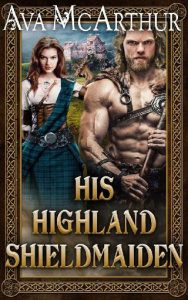 She vowed to kill Vikings. How can she now vow to love one?

Stories about “the clan with the female warriors” have reached the far ends of Scotland. After the Callan clan lost almost all its warriors while fighting the Vikings, the women have picked up arms, determined to keep their village safe. Fiona Callan, the daughter of the Laird, is the most eager lass when it comes to fighting but the least eager one when it comes to marrying.

However, her father knows that they need strong men to use as warriors, workers, and to create new families, so he asks the help of another local Laird who is head of a mixed Viking and Highland tribe. The deal he proposes is not the one the Callans had in mind; they will receive men, but almost all of them will be Vikings or of Viking descent!
Fiona is furious and declares that she would rather die than have the women of the clan marry Viking men, even if they claim to be friendly. But since this is their only choice, the Callans welcome the men lead by Varrik, the largest and most savage-looking warrior Fiona has ever seen.

If Varrik decided to attack her, it is evident that he could kill her with a swing of his ax, but Fiona wants to stay close to him and find what he is about. She might hate him, but after a while, even she admits that he is a competent leader. As more and more people begin to trust him, Fiona starts to feel left behind, and even if she is not interested in marrying a Viking, her young sister looks pretty eager to produce new warriors with the beast of a man, Varrik.

Fortunately, after some weeks, fate seems to finally smile at Fiona as the son of the Laird from a neighboring clan asks for her hand. But since the old enemies have turned into allies, can the old allies prove to be enemies? If Fiona’s suspicions are true, she will need all the warriors she can find, and driven by hate, she just denied the help of the strongest warlord of them all.