Home
Historical Romance
His for a Night by Bethany M. Sefchick (ePUB) 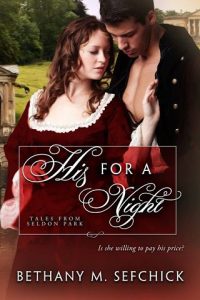 His for a Night (Tales from Seldon Park #25) by Bethany M. Sefchick – Free eBooks Download

Five years ago, Ellie Smith, then known as Lady Elise Kempshaw, fled her tyrant of a brother and the significantly older man she was to marry. Arriving in London, Elise manages to find work as a serving girl at the infamous gaming hell, Dionysus. There she is brought face to face with the sort of man she always wished to marry – the notorious Lord Richard Haywood. Lord Stag himself! If only he weren’t so far above her touch.

Brooding and grouchy, Lord Richard Haywood believes himself content to manage his gaming hell and play the role of the aloof, unobtainable Lord Stag during Dionysus’ weekly masquerade balls. However, thoughts of a pretty, curvy serving girl with a spirited streak constantly fill his mind. Except that his own rules prevent him from dallying with the staff, drat it all, anyway!

One night, passions between Richard and Elise flare, and one kiss leads to another. Until her brother arrives demanding that Richard hand over Elise. Otherwise. he’ll have Dionysus closed. Secreting Elise away to his country estate, Richard believes that he can keep both Elise and Dionysus safe from her brother until everything is sorted out and life can return to normal. Will the avowed bachelor find that keeping the delightful Lady Elise out of his bed as easy as he assumes? Or will Elise prove more than a match for the avowed bachelor?