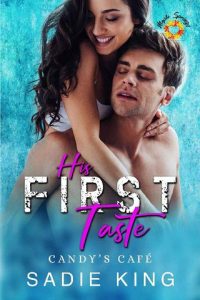 Justin:
I’ve been in love with Tara ever since she started using the corner table at Candy’s Café as her remote workspace.
She’s the most confident, fierce woman I know.
But I’m just the barista, the guy who makes her latte. I don’t think she even notices me.
When I work up the courage to ask her out, I don’t expect she’ll say yes. Now it’s my chance to show her I’m a man and not a boy.
Except there’s one area where I’m inexperienced. And if she knew I was a virgin, would she stick around, or would it be a deal-breaker?

Tara:
When a man looks at you the way the baby-faced barista at Candy’s Café looks at me, it’s hard not to be flattered. When he asks me out for ice cream, I’m not going to turn him down.
He’s ten years younger than me and there’s something exciting in that. I’ll be his teacher; I’ll show him everything he needs to know.
But he’s inexperienced and doesn’t know the difference between love and lust. And I won’t stick around to get my heart broken by a boy.
Take a seat at Candy’s Cafe where the goods are freshly baked and sprinkled with love.
Meet the sisters who run the café, the staff who work there, and the regulars who stop by. There must be something in the cookie batter, because each one finds their own special happily ever after.