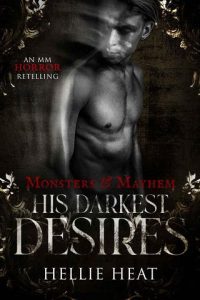 His darkest desires consume him. Soon, he’ll set them free.

Dr. Henry Jekyll is a man consumed by his own hateful nature, a monster hiding behind the mask of a kind-hearted physician seeking only to do right by his patients. However, when a fateful encounter with the beautiful and enigmatic Liam sends his desires spinning out of control, Dr. Jekyll takes measures into his own hands to kill his urges before his urges kill the man he’s come to care for. And everyone else around him. Never before has he wanted someone so badly. For better or for worse.
Dark secrets emerge as Dr. Jekyll creates a potion to alter himself, to build a better, purer man. But what results is instead a more terrifying beast than Jekyll could have ever realized. His darkest desires made flesh.
Madness, murder and mayhem ensue. Horror unlike any before. With the ever-vigilant Detective John Utterson on his tail, Dr. Jekyll must fight both the monster he’s created and the ones inside his head.

Trigger warnings: His Darkest Desires contains very dark themes that may be upsetting for some readers. Contains graphic depictions of violence, rape, scenes of dubious consent, police violence, period typical homophobia.
His Darkest Desires is an MM horror retelling of Dr. Jekyll and Mr. Hyde, as part of the collaboration Monsters & Mayhem: An MM Horror Collection, adapting some of your favorite classic horror stories with an MM romance twist.