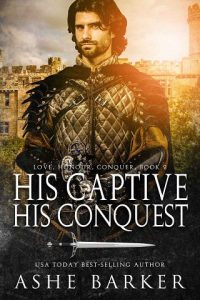 I want her. She intrigues me, this fiery Scottish wench. I mean to have her.
I shall survive. I will not weaken. This English lord can do as he will with me, but I shall never surrender.

It is the year 1490. Stephen Parnell, Marquis of Otterburn, has been sent by Henry VII, the new Tudor monarch, to guard his northern shires against the ferocious Scots. Battle-hardened by years spent in the service of his king, Stephen is more than equal to the task and has no hesitation in hunting down the rievers who have laid waste to his people’s crops. However, his skills as a warlord are no use to him when faced with the fiery little Scottish wench he captures in battle and decides to keep as his own, for a while at least.

Flora MacKinnon is used to taking charge. Her ailing father needs her, and she is determined to do what must be done to serve her clan. She does not expect to be taken captive by a mighty English warlord and certainly does not intend to anger him so much that she finds herself lashed to a post awaiting a whipping.

But events take an unexpected turn. Will the mighty Marquis of Otterburn follow his heart or his head? And, when tragedy threatens, can Stephen protect those dearest to him?

Warning: This book contains sexually explicit content which is only suitable for mature readers. If such content upsets you, please do not purchase this book.