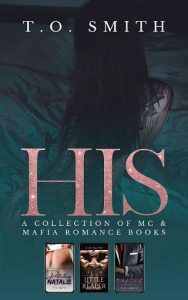 Protecting Natalie: A Stand-Alone MC Romance
Kaden Brookes never bothered with any female outside of the club women.

Until he crashed into Natalie – quite literally.

Her fiery attitude amuses him, and he wants more. But he quickly realizes there is a lot more to Natalie Farmer than quick wit and a temper that rivaled even his.

He wants Natalie as his woman, and he will make her his.

But Kaden has his work cut out for him because Natalie isn’t as easy to claim as he thought she was.

Because when her life is on the line, she will do whatever is necessary to protect herself.

That includes leaving those she loves behind.

Little Reaper: A Stand-Alone MC Romance Novel
Amberosa Calloway betrayed the Reapers to protect them, but now her betrayal has caught up to her.

Now wanted dead by one of the most dangerous gang leaders in America, Amberosa needs protection.

And who better to be protected by than Jayden King – her brother’s Vice President?

Salvatore: A Stand-Alone Mafia Romance Novel
Sasha Reids just wants to do her best to be normal after she gets out of prison.
But she knows that’s a big wish – one that’s not going to get granted.

Because when Salvatore Bianchi realizes that Sasha is in trouble, he vows to do everything in his power to protect her.

That means marrying her.
And what he wants in return?
An heir.