Home
Historical Romance
His Bounty: Escaping the Pirate by Else Holland (ePUB) 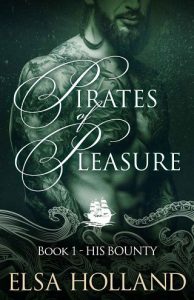 His Bounty: Escaping the Pirate (Pirates of Pleasure #1) by Else Holland – Free eBooks Download

Captain Jax was a pirate who kept his word. His word mattered. He was respected and counted on by some of the fiercest men at sea. He gave his word he would delivery her and he would. If he could just get her to trust him enough to tell him what she was running. Blue had crossed seas and covered continents to get back to England, and she would do anything she needed to escape the delicious pirate to see her mum before she died. But that too handsome pirate was crafty, made her legs weak and her head foggy. Then he went and totally surprised her, he listened, and he helped. What kind of a pirate was he? It was only a matter of time and he made her think of a life that wasn’t hers to live, a life where she didn’t have to go back to the man who owned her.