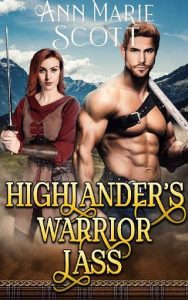 Charming a woman is not easy but charming a warrior lass is nearly impossible.

Erik McGregor is traveling to McPearson land, trying to strengthen the fragile bond between the two clans. Before he arrives, he comes upon a young lass, who has accidentally stuck in a tree while hunting. After taking his time to make fun of her, he helps her, only to realize that she is the most charming and spirited woman he has ever met. However, before being able to learn more about her, the beauty dashes away.

After being freed from that tree, Finley can’t believe she got herself in such an awkward predicament. Trying to forget the embarrassing incident, she rides back to the castle where Lady McPearson expects a visit from the neighboring clan. To her great dismay, Finley realizes that the McGregor ambassador is the very man who helped her in the woods!
Being a proud warrior, Finlay has never felt greater shame in her life. Everyone knows her as a brave and even fearsome woman, and this stranger will now think of her as a mindless child. Trying to restore her reputation Finlay aims to be as provocative and abrupt towards Erik as possible. Yet, that seems to make him even more interested in her…

The two will have to interact for a few more days while Erik is there, and Finlay discovers that the mighty McGregor warrior is not be as bad as she initially thought. After all, she is very attracted to a man who cares for his clan and who would do anything to protect his people. However, when Erik’s former lover appears, Finlay abandons the crazy, hopeless thoughts she had entertained about him.

Erik has been enchanted by Finlay by the moment he saw her, but he could not reveal that to her. Now that his former lover has appeared again, Erik will have to get over his ego and speak to Finley about his feelings. However, he will not have time for love as he will be called to do what he was meant for; protect the clans. And for the first time in his life, Erik might need to take the help of a woman warrior.