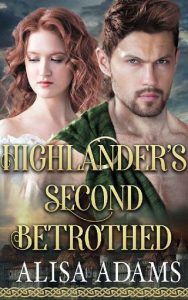 They are each other’s second and last chance.

The only feeling worse than never finding love is losing it, and Fionna Campbell knows that from personal experience. The lass was about to marry an esteemed Highlander, but when her great day arrived, her betrothed abandoned Fionna, leaving her heart wounded and her confidence shattered.
After a long period in which Fiona tries to recover, she decides to visit the Mcdougal clan and her friend Alasdair Mcdougal who is about to get married. Being the Laird’s brother and the head of the warriors, Alasdair must find a way to secure funds for his men, and getting a dowry from a marriage is his only solution.
However, when the day of his marriage arrives, his bride is nowhere to be found! Alasdair demands to know what happened and discovers that his future wife has left him for another man… Fionna’s heart is breaking as she knows exactly how he feels, and takes a step forward, offering Alasdair to wed her instead!
Alasdair would never let Fionna down and agrees to marry her even if there is no agreement between them for money. Only after that does Fionna learn that he was marrying to help his warriors! Alasdair hid that information from her out of honor but has she made things worse for him? Thinking that she acted recklessly, Fionna begins to believe that her second betrothed might end up loving her even less than her first one…