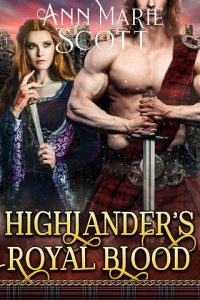 Katherine Mcdougal had three years to prepare for her coronation ceremony, but that does not make her any less nervous. After all, it is not common for an eighteen-year-old lass to become the leader of a Scottish clan! Yet, Katherine, being the former Laird’s cousin, is the only legitimate heir to the title, a fate many would kill for. Indeed, the first attack against her life takes place the very first day of her ruling, and it is evident that to take the lead of the clan, she will have to go through hell.

Cameron McAuley is a fabled warrior and the one who had escorted Katherine to safety after her cousin’s death. Today, seeing her taking the lead of her clan, he is surprised of how much the once spoiled girl has grown. When he learns that after the current events, he is once again appointed to protect the young lass, he protests. Being unable to mouth a good excuse, he will once more fight for her.

He approaches Katherine and tries to lay down some rules, but now the tables have turned, and she declares that she’s the Lady of the Mcdougal clan, and he should follow her orders! After the fight, Katherine decides to dismiss Cameron, but a second, more vicious attack, makes her realize how much someone with his skills is needed. Cameron is willing to give his life to protect Katherine’s not for duty, not for his clan, but for her. But it might be too late now as Kathrine has sent away the one person she could trust…