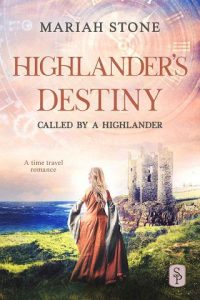 Fiery passion. Fierce enemies. Forbidden attraction. A modern British spy and a medieval Highlander fight for a shared destiny of love and freedom.

Scotland, 2022. Horses, tents, and handsome Highland warriors—preparations for the Battle of Bannockburn reenactment are in full swing when British intelligence agent Danielle Field visits Stirling Castle. But when she touches a rune-covered rock and plunges through time to the Middle Ages, the battlefield looks all too real.
Scotland, 1314. Highland warrior Colum MacDonald betrayed his clan to save his queen. Only helping Robert the Bruce win the upcoming battle will restore his honor. Discovering Danielle listening to the Scots’ strategy, he mistakes her slim figure and masculine clothing for that of an English lad—a spy and maybe even an assassin.
With Danielle in shackles, Colum sets out to infiltrate the English camp and kill King Edward II. Frantic to escape, Danielle works to outsmart her captor at every turn. But the infuriating Highlander awakens cravings she can’t ignore. And once he realizes she’s a woman—one tempting enough to distract him from his mission—Colum battles his own desire. And loses.

Can all-consuming passion bring love a victory that bridges centuries?