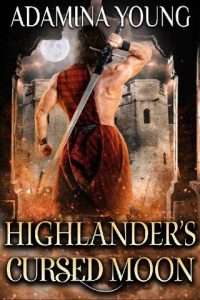 They said no man could keep them apart. But what about a dark omen?

Ewan Brodie knew since he was a boy that he would marry Abigail Drummond when she would turn eighteen. But the days of the betroth that were supposed to bring them immeasurable joy turn to a nightmare when they both lose a parent in the span of seven days. While Ewan is trying to cope with his grief, Abigail’s father comes to him with the deathblow; his marriage with Abigail is off!

It appears that the deaths mean much more than everyone thought at first, as they perfectly fit with an old dark omen which predicts a fruitless marriage and sorrow for both clans. Ewan feels that he has been hit by lightning and tries to find the spiritual man that spoke of this disastrous omen.

Abigail has loved Ewan ever since she was a young lass, and she cannot accept the terrible news. To make things worse, in order to ensure an alliance with his clan, a marriage will now be arranged between her and Ewan’s cousin!

Unfortunately, Ewan learns that the events that happened are precisely the ones described in the omen, but he is determined not to give up. However, while they try to fight for their love, Abigail is hurt and almost loses her life after an unfortunate event, and even Ewan begins to think that the dark omen might actually be true…

They two begin to wonder if it is selfish to risk their lives so that they can fulfill their own desires. But whether the threats they face are put there by fate, or it is mortal men who try to keep them apart, one is for sure; only together do they have a chance to get out of this inferno.