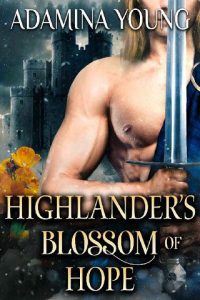 Can a marriage of convenience blossom into love?

Barclay MacFarland returns to the Highlands, and instead of a warm welcome, he finds his step-uncle in the process of trying to wrest his birthright from him. Determined to do whatever is needed to get his heritage back, Barclay calls on his old allies of the Braenaird Castle. The Douglass sisters are his childhood friends, and although they are happy to see him, a feud is something that no one desires…

Aileen Douglass, however, has a plan that will rid him of his uncle without the need for a single battle to be fought; A clause in the will of Barclay’s father says that in the event of his son’s marriage, his wife would receive the disputed land as a marriage gift. Barclay is excited, and in an unexpected turn of events, he asks if Aileen would be his bride!

Aileen is surprised as she has resigned to being a spinster. Her sisters are all so cheerful, attractive, and loud, and in comparison, she considers herself to be unremarkable and undeserving of a man’s attention. She did not want someone to marry her for her dowry, but since that is not the case with Barclay, she agrees.

Barclay sees their marriage as a cold agreement and not romantically. Thus, when Aileen tries to explore her feelings and come close to him, he is taken aback. Aileen is disappointed, but the trouble for Barclay has only begun, and without the spirited lass on his side, his hopes of survival are slim to none.