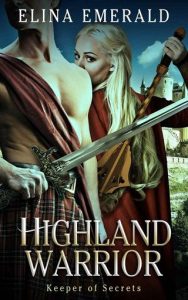 Stand-alone novel. However, the main characters appear in Sorcha and Lachlan from ‘The MacGregors’ series.

Iain Henderson is a fearsome warrior and trusted advisor to the Henderson laird. For years he pursued an old flame who repeatedly broke his heart. Just when he thought he would never move on, he encounters a mysterious woman who piques his interest and makes him feel alive. If only strange men would stop trying to kill her every time he’s nearby, he might consider courting her.
Yesenda MacDonald was raised in an abbey by an elite order of nuns. Trained in the ways of combat, she has sworn to protect an old secret. A secret so deadly that even William, the Duke of Normandy, wants her silenced. Fiercely independent, she has no time for matters of the heart. That is until she meets a Highland warrior who has made it his mission in life to protect her at all costs.

Warning: This story contains alpha males and feisty heroines wielding weapons of mass distraction. Not suitable for persons under 18.