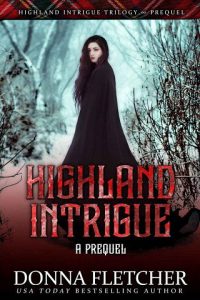 She’s safe. You’ll never find her. And a curse on the three of you for betraying your friend. May you suffer and never know peace until you right this terrible wrong. But you, Lochlann, will suffer the worst for you were his best friend.

Bliss is worried for her two sisters, Elysia and Annis as are those in their clan who have marriage-age daughters. A search goes on to find a wife for the cursed lord. He’s lost three wives in the last six years due to the curse inflicted upon his father twenty years ago. There are rumors that he is half savage, having spent the last year on foreign soil with heathens. No noble will allow their daughter to wed him and so his father, Lord Lochlann of the Clan MacClaren, has sent two men to find a peasant woman for him to wed and produce an heir since he is the last of three sons, the curse having claimed the other two.

Bliss can’t bear the thought of either one of her sisters forced to wed a man that will surely mean her death. Elysia is a gentle soul, preferring the quiet and her stitching. Annis is the opposite, outspoken, no interest in men or marriage, but the most beautiful out of the three of them. Bliss doesn’t worry about herself being chosen since most believe her past childbearing age at her twenty plus years.

The situation is much worse than first thought for two other men were cursed that awful night and a search goes on for wives for them as well. One lost his voice the day his brother died while some say he killed his brother in a fit of madness. The other is so cursed that death will not even touch him. He has suffered endless wounds and injures that would kill most men, but not him.

It is a nightmare for Bliss. She has the ability to help her sisters should they fall ill since she is a fine healer, but curses are beyond her healing abilities. The only choice left to her is to seek out the witch in the forest and see if there is a way to break the curse.

Unfortunately, time is not on her side and fate decides for her.