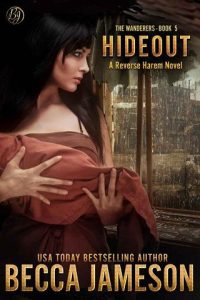 There is no safe place in the world anymore, especially for women. For several decades, the birth rate of females has been declining. Militants, the government, and private citizens alike will do anything to find young women and force them into unthinkable arrangements.

Against the darkness of this world stand The Wanderers—a secret society born to provide sanctuary for anyone who believes in free will and democratic notions. Their numbers are growing and their citizens live in safe, hidden compounds.
Grecia has never known security or kindness. Stolen from her parents at a young age, she was raised in a girls’ home and later moved to a women’s shelter. At twenty-one she was abducted and held by militants for a year. Pregnant and alone, she knows this cruel life is almost over.
Jeremy has been with The Wanderers for many years, but he’s never pursued a woman. Until Grecia moves into his spare room with her baby girl and her emotional baggage. He’s determined to help her even if she never returns his affection.
When Elias meets Grecia, all he wants is to help ease her pain and make sure she gets a good night’s rest. He doesn’t expect to fall in love with her baby, Amelia. And he certainly doesn’t expect Grecia to bring him to his knees.
Dawson lost his wife and baby to militants. He’s jaded and reluctant to love again. He knows he can’t survive another love loss. But Grecia and her sweet baby worm their way into his heart like they do everyone they encounter.
Grecia will have to battle a lot of demons before she can open herself up to even one man, let alone three. But they’re a package deal and growing on her every day. What if she’s never able to be the sort of woman they deserve?