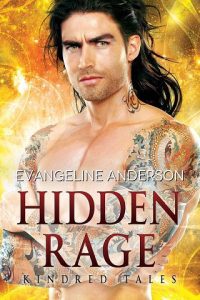 Is it wrong to fall in love with your kidnapper?

Dr. Roberta McClelland–Bobbi to her friends–is a Xeno-Cultural Anthropologist living her lifelong dream of studying an alien species. On the peaceful planet of Avria Pentaura, she spends her days tending crops and learning her new people’s customs. But her peace doesn’t last long–she doesn’t count on raiders from the neighboring planet, Saurous, coming to visit and she especially doesn’t expect to be kidnapped and held captive by a rogue Kindred named Dragon.

Dragon isn’t native to Saurous–a planet inhabited by lizard people called Saurians. His parents were killed when he was little and he has been adopted into the Crimson Blades crime family. As a Hybrid–a mix of two different types of Kindred–he isn’t sure of his heritage. He only knows that his mother was a Vision Kindred, but his father’s origins and the other half of his own nature are a mystery to him.

The big Hybrid has never met a female like Bobbi before and the minute he sees her, he knows he has to have her. The problem is, his sadistic Saurian brother, Zerlix, wants her too. Dragon can think of only one way to protect the curvy little female–he must marry her and keep her with him always.

But Bobbi is a modern woman and she’s not interested in marrying her kidnapper, thank you very much. She’s determined to run away no matter how hot her Kindred captor is and she’s going to give the evil Zerlix the slip too. But when she gets into trouble in the notorious Blue Light District, can Dragon find her in time to rescue her? And will happen when the hidden half of his heritage comes out?