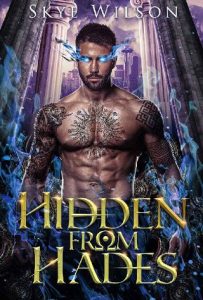 He says he knows me. Who I am. What I am.
I’m pretty sure my boss Hayden is on some sort of weird power trip. He’s sexy as hell, but has an arrogance that spells danger. I’m only serving drinks in his seedy strip club until I can afford my own flower shop. I just have to avoid the inexplicable pull between us in the meantime.
Then he claims I’m Persephone and he’s Hades, the God of the Underworld. He says I was hidden from him after a curse was put on him, and now he’s here to awaken my spirit so he can take me back to the underworld. That his position in the underworld depends on it.
Either he’s crazy . . . or I’m a mythical goddess. A queen of the underworld. His Queen.
Except if I was his Queen, he needs to do more than seduce me. I’d want him to love me. To Hell and back. No matter how strong the attraction is that burns between us, it’s obvious someone like him isn’t capable of love.
And there’s no way I’m going back to the underworld without a fight . . .