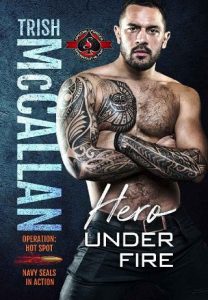 When he discovers that Madeline Roux, his hot as hell weekend hookup—and the only woman who’s tickled his interest in years—has a daughter, he walks away. They’re better off without him. Then he finds out Madeline’s ex took their kid into a cult, and Madeline joined to get her daughter out. It’s been weeks now, and nobody has heard from her. Time to go in and get the pair out. He might not do kids, but he will rescue them. After they’re safe—he’ll walk away. Again.

Madeline Roux is in one hell of a mess. With her ex dead and her daughter under the perverted eye of the cult leader, the stakes are rising fast. She needs to get Cassidy out of the compound before the cult leader acts on his obsession. Her bad situation turns ugly when the cult up and moves to the Amazon Rainforest to avoid the FBI. Now Madeline and Cassidy are stuck, thousands of miles from home, in the middle of the Amazon, with no way to escape the armed cult.

Things start looking up when Devlin and his SEAL team infiltrate the Amazon compound in an attempt to rescue them. At least until Amaru rebels attack the SEALs and storm the cult compound, scattering everyone to the wind.

No…Devlin doesn’t do kids…not anymore. But to keep Madeline’s alive, he’ll have to get involved, up close and personal, and swallow the bitterest pill of all: regret.