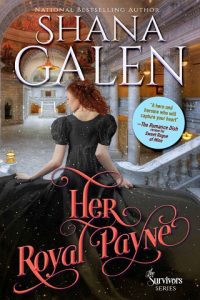 Rowden Payne, known as The Royal Payne, makes his living in the high stakes world of bareknuckle boxing. The disavowed son of a duke likes the focus boxing requires. It keeps his mind off the tragedies in his past. But just as he’s poised to knock out his biggest rival, he’s mesmerized by a pair of exotic hazel eyes in the crowd. He finds himself flat on his back and short fifty pounds.

She’s a prude with a problem.

Modesty Brown’s father has vanished. The strict minister has never disappeared before, and Modesty is left having to rely on elders of the church for help. But when she becomes a burden to them, she has to seek out her aunt, a woman of high rank. Modesty’s only way of finding her is by asking the only man she knows of that class—Rowden Payne. Unfortunately, she’s the one responsible for the Royal Payne losing his crucial fight.

Sometimes the hardest hit is the one to the heart.

Rowden doesn’t want to care for anyone or anything, but if he can just help Modesty find her father, he can be rid of her. Soon the revelation of her father’s secrets and lies puts Modesty, Rowden, and their friends in danger, and if Rowden can’t admit his feelings for Modesty, he’ll lose her forever.