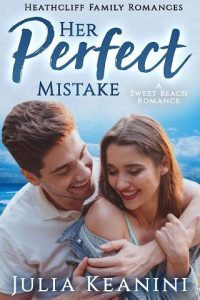 The man she’s falling for or her father? An impossible decision…but one that Ally has to make.
A dream job in a dream location. That’s the life Ally Larsen is about to step into. Until one phone call changes it all. Her father has been diagnosed with Alzheimer’s and all of his care and medical bills have fallen to her mom. Knowing she can’t abandon her family in their time of need, Ally is returning to her island home of Maui, her dashed plans all but forgotten.
Luca Heathcliff knows his reputation isn’t stellar. And he’s done nothing to improve it by dating no one woman seriously and spending all of his free time on the waves. Getting sick of the fact that his brother is always looking down on him, Luca decides it’s time to change part of that – he’ll never fall in love again – but he’s presented an opportunity to possibly become a professional surfer. Not only would that contract show that Luca can be serious about one thing in his life, it would prove to his brother, once and for all, that Luca is good for something.
But when a picture of Luca looking inept in the surf goes viral his entire dream could be lost. And not only that, his mother has been diagnosed with early onset Alzheimer’s and Luca isn’t sure what to do. Only after he meets Ally does Luca start to feel some direction again…but can Luca get over past hurts enough to open his heart again? Or will the truth of the picture come back to haunt the budding romance and obliterate it before it can begin?