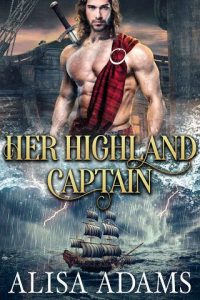 The man responsible for the death of her mother is her only hope for survival.

Darling MacRae DeLeon lost everything but her horses in a devastating shipwreck and is now lying unconscious on a foreign land’s shore. Yet, her troubles have only begun as she is found and captured by the ruthless and coldhearted Scottish Captain Lawrence MacLeod.

Captain Lawrence is a Highlander, just like the half-blooded lass’s mother, whom she has not had the time to grieve for yet. Unfortunately, her mother did not die in the shipwreck, but in the hands of a horrendous man, whom Darling only barely saw. In a terrible turn of events, it appears that Lawrence matches the description of that man…

Lawrence is surprised by the vigor and courage of the strangely named girl, but it is obvious to him that she has secrets she does not want to share. Darling’s last hope lies in reconnecting with her Spanish father, but it has been so long since she last saw him that recognizing him will be as challenging as recognizing the killer. Confused and in agony, the more she stares into the piercing blue eyes of the mysterious Captain, the more Darling feels like he is not a murderer. Fate will leave her no choice as with her father nowhere to be seen yet, there is only one way to escape the current situation, and that is by trusting Captain Lawrence. Soon, Darling will realize that neither the Captain nor her father are who she thought they were…