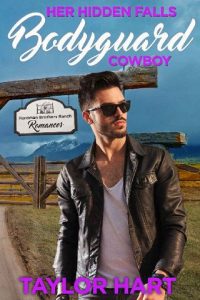 A small town cowboy turned FBI. A woman who has been running for way too long. The fake marriage that just might save both of them.

Sean Hardman, police officer and part-time poet, had a dream to be FBI, but he was willing to give it up for a woman. Too bad said woman told him she’s not interested. Fine, he’ll leave this small town in the dust.
Angela Orion never wanted to hide out in Hidden Falls and she really never wanted to put the lives of her friends in danger. But when the mafia thug who killed her brother finds her, a shooting match ensues; the Hardman family will not go down without a fight.
When the FBI shows up to protect her, she really never expected Sean would be the agent in charge of her case and she definitely never expected that pretending to be married to him would be part of she’d be posing as his wife. Will Sean and Angela be able to trust each other enough to keep her safe and get a second chance at love or will the mafia thug take them both down?