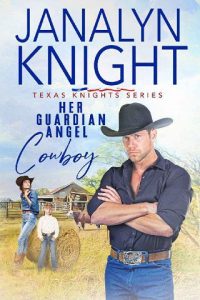 Ward Ramsey hires female ranch hand Jayme Bonner against his better judgement. Something about the desperation in her eyes and that letter of reference she hands him makes him do it. But when she lets her boy out of her truck, his heart jolts. The woman and her son bring back memories of a tragedy that he’ll never forgive himself for. No way could he have them on his place. But because he’s a man of his word, he’ll give her two weeks to prove herself.
Jayme needs sanctuary for herself and her son Dusty from the dangerous ex-con on her trail. She’d put him in prison nine years ago, and now that the system had let him out early, he’d make good on his threat to kill her. She’s been on the run for weeks and with this job, she can put Dusty in school and remain out of sight, far from south Texas where the treacherous man knows to look.
What Ward doesn’t count on is caring for his very capable ranch hand and her adorable eight-year-old son. The boy’s blonde curls and insatiable curiosity are irresistible though the connection to his own terrible loss tears at Ward’s heart. When dangers draws near, he must decide. Will he set his pain aside and put his life on the line for this mother and son?