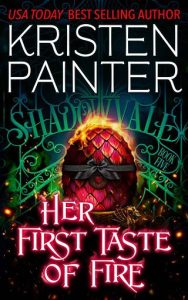 Most people think Nasha Black lives in Shadowvale because that’s where her father, one of the Four Horsemen of the Apocalypse, lives. But Nasha has another reason for staying in Shadowvale and it’s not just the bakery she owns and operates. She has a devastating curse of her own. One she’s never told a soul about.

Shadowvale has given chocolatier and dragon-shifter Charlie Ashborne a refuge from the reality of his cursed life. Until now. He’s been summoned to the dragon census, where all unmated dragons will be paired off. If he doesn’t show, the dragon council will come to him. His desire to protect Shadowvale means not only will he end up with a wife he doesn’t want, but the curse he’s kept hidden for so long will be exposed.

Facing certain humiliation, Charlie is about to leave for the census when an attractive woman shows up at his house, desperate for more of the chocolates Charlie sells in his shop. Nasha needs to know what magic he puts in his chocolate. She’s never tasted anything like it, literally, and it’s changed her life. Discovering he’s headed out of town pushes her to make a crazy offer. She’ll pretend to be his wife in exchange for his recipe. Seems fair enough.

Making a pact with a chocolate addict might not be the right move, but Charlie will do anything to avoid the dragon census mating games, so he jumps at the chance to claim Nasha as his wife for a week.

It seems like the perfect plan, until they find out the rules have changed, leaving them no choice but to compete in the games. Unexpectedly, they begin to fall for each other, amazed by what a good team they make. But as competitors try to tear them apart Charlie and Nasha wonder if they will ever taste sweet victory, or just the bitter dregs of defeat?