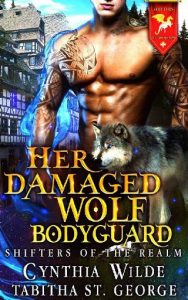 After being cooped up, and closely watched over for years of her life, in her little house with her terminally ill mother, Aubrey Pari was excited to start her dream job at the Ravenstone Realm Renaissance Festival. It was everything she’d wanted and more in a job. But suddenly, she finds herself homeless, and thrust into a world that only existed in her wildest childhood imagination where fairies and trolls are real. With the help of some new magical friends Aubrey, must learn quickly how to harness powers within her that she didn’t even know existed a few days ago to battle a demon who wants to drag her to hell.
Along the way, she meets the hero of the Festival Sir Bevon the Brave, otherwise known as Alec Bevon, who is not only tasked to oversee the daily goings on at the faire while the owner is otherwise engaged, but he is given the job to supervise Aubrey, making sure she doesn’t perform unauthorized magic. As they each struggle with their own insecurities, Aubrey and Alec work together against the forces of evil that have pursued Aubrey her entire life.
Reluctantly Aubrey falls for the competent, yet conceited, dashing young knight and wolf-shifter, who becomes not only her protector but her personal champion. But can they defeat the forces aligned against them in time? Can they overcome their own fears?