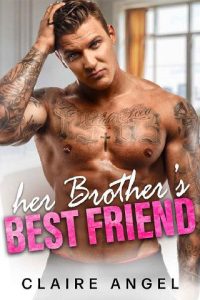 Why on the earth, I had to fall for my brother’s best friend, once again?

My brother had just forgiven me for sleeping with one of his best friends and now I was falling for his other best friend.
Steven was supposed to make me comfortable in this new place, but I didn’t realize when he made his way to my bedroom and started comforting my body. In so many ways.
I knew better. There was no excuse. I got too close and once he got his hands on me, there was no stopping what happened next.
When I moved to the apartment close to Steven’s, he got a chance to fulfill his dirtiest desires, which he had been hiding for years. Steven had always had a crush on me, but I couldn’t see it as I was madly in love with Nelson.
Luke, my brother, Nelson, and Steven were best friends. But they broke apart because of me. After many years, Luke forgave me. But… before I could feel the joy of being with my brother, I put myself into bigger trouble.
Every time I was with Steven, his intoxicating personality put me in a state of hypnotic trance. His soft lips met mine, and I was lost. There was just something about the way he begged me with his eyes. We both knew that what we were doing was wrong. Nothing was said, but it didn’t have to be. When Steven covered my body and soul with his desires, there was no going back. Steven was there at just the right moment, saying and doing all the right things.
And I was falling for Steven… Yes, once again for my brother’s other best friend.
I was being selfish and reckless. I knew being a mother, I needed to act a certain way, but I felt like I had no control. No matter how much I tried, I behaved like a love-struck teenager.
My brother thought I was happily married to my son’s dad, Nelson.
Once again, a lot was at stake. I messed it all up, and that was not the first time…
What is going to happen when my brother finds out? No matter what Nelson did, my brother is not going to accept my relationship with Steven. Am I going to lose my child and my brother once again, especially when Nelson wants me to stay in his life? How do I stop my heart from loving Steven?