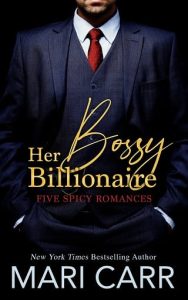 For the first time, you can own five of Mari Carr’s hottest billionaire boss romances in one spicy anthology. Set includes Hard and Fast, Wild Temptation, Full Position, Sugar and Spice, and Captivated.

This anthology is a must-have for fans of those bad boy billionaire bosses and an amazing way to “test drive” five of Mari Carr’s most popular series, including Italian Stallions, Wilder Irish, Big Easy, Scoundrels, and What Women Want.

Hard and Fast – Penny is ready to make some changes in her appearance and her nonexistent love life. She’s smart enough to know she needs help—andwho she needs it from. Her billionaire playboy boss, Gage Russo. Bachelor Gage is never lacking for female company, yet lately, he can’t shake feeling bored. Until Penny challenges him to a friendly wager…one he promptly loses. Her prize? Lessons in seduction—from him.

Wild Temptation – May knows she’s out of her league, not only in her new job, but with her boss. He makes her want things she’s never considered—kinky, sensual, wicked things. When trouble at home shows Lochlan more about her life than May wants him to see, there’s no stopping the sexy protector suddenly determined to claim not only her body, but her heart as well.

Full Position – Though Bella has crushed on Justin and Ned since her first day on the job, she’s smart enough to know a ménage with her hot bosses is probably number one on the list of workplace no-nos. But a genius wouldn’t say no to their exceptionally tempting offer — a no-holds-barred night of wicked fantasies at a local club.

Sugar and Spice – Ginny’s thirtieth birthday is shaping up to be the worst ever, until her best friend, confirmed bachelor Ryan, takes her to a new club she’s been dying to visit. Sneaking off to explore, Ginny is busted by Ryan. Instead of taking her home, Ryan intends to teach her a lesson—and immediately commands her to strip.

Captivated – Homeless and down on her luck, Shea lands a new job as a waitress in a fantasy show nightclub and can’t resist the lure of sleeping on one of the prop beds. But unknown to her, the enigmatic boss is watching her. Travis, always the voyeur, finds himself unsatisfied with just watching, and decides he’s going to claim Shea for himself.