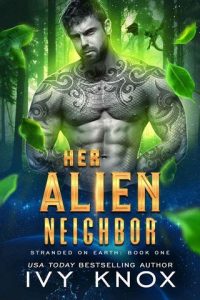 Hiding his true form while living among humans on Earth is not easy, but for thirteen years, Axil Monroe and his four brothers have done it. That is until an enticing, infuriating female moves in next door.
All Vanessa Bradford wants is to become a successful actress, or successful enough to pay the rent on her tiny L.A. apartment. When she receives another rejection, she wonders why she’s still trying, and a call from her sister only makes things worse. Her dear Aunt Franny has passed away, and she has to travel to her humble hometown in New Hampshire––a place she hoped to never see again.
Trauma from her past catches up immediately, forcing her to face pain and injustice she has yet to process. When she discovers she has inherited Aunt Franny’s house, and the obnoxiously loud man who lives next door with his brothers, she feels utterly defeated.
Now she’s stuck in a place she hates with a house she doesn’t want that is in need of repairs she can’t afford. Then she finds a series of letters Aunt Franny left her, scattered around the property, sending her on a treasure hunt for a pile of cash.
The only problem? She needs Axil’s help to solve the riddles that take her to the next clue, and he’s the last person she wants to be around.
As Axil and Vanessa spend time together, Vanessa begins to question the direction her life is heading, and what true happiness for her would look like. Will she find everything she’s been missing in the boy next door?

*Her Alien Neighbor is the first installment in the Stranded on Earth series, featuring a plus size, 37-year-old woman running from her painful past. But when a death in the family forces her to return home, the one place she never wants to see again, she realizes it’s time to confront her pain. And the cute guy next door is very eager to help.
If you like huge, sexy aliens, enemies to lovers, steamy love scenes, and happily ever afters, you’ll love this series!