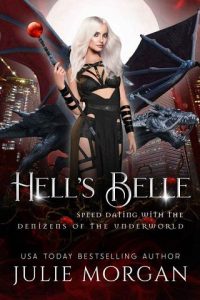 Escaping Hell is only the beginning…

Annabelle Clayton’s life was pretty predictable. Quiet as a dormouse, what she lacks in charm, she makes up for in her beauty. Being taller than most women never stops her from wearing heels, and embracing her curves helps her sex appeal when it comes to working at the dark, underground dungeon, Den of Sin. What she never expected, though, was finding out she could see the dark side of everyone… and everything.
A family heirloom has been with Annabelle her entire life and one fateful night, it begins to sing. When she opens it, the unimaginable happens: the spirit of a lifetime ago is released and plummets itself into Annabelle, reminding her of who she once was—a Goddess of the Underworld: Persephone.

Cade Fenix, Beta to the Fenix Dragon pack, agrees to attend the speed dating mingle at DeLux Cafe against his better judgment. The moment he walks in, he knows it’s a mistake… until he sits down at the table of his fated mate. He never saw her coming and from that night forward, Cade embraces what it means to find his mate.
When Cade’s village is attacked, Annabelle’s life is in danger and she is taken by a rival dragon pack. She will surely die if she cannot fight back. And just as Persephone begins to push forward to release her energy, the inner spirit recognizes a familiar being nearby.

Will Persephone intervene in time to save Annabelle’s life?
Will Cade save his kingdom from ruin?
Read the story and find out!

*Hell’s Belle is book eleven in the Speed Dating with the Denizens of the Underworld shared world, filled with sinfully hot dragons, reincarnated souls of underworld goddesses, and more.