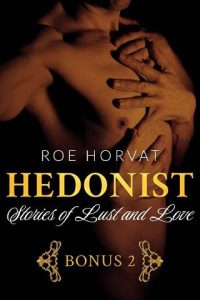 Thomas and Orin
Shy and modest, Thomas keeps to himself and resists the new alpha’s attempts to seduce him. He’s promised to stay pure, except Orin pursues him relentlessly. It’s wrong and foolish to give in—Orin will only use him and cast him aside—but day by day, the temptation grows until it becomes torturous.
_

Ursus and Stephen
An alpha is forbidden from lying with another alpha. If his abominable desires were known, Ursus would surely be cast out from the Royal Guard amidst a scandal. But whatever he does, he can’t smother his passion for Stephen. It grows until he’s not the master of his thoughts and body. And what if Stephen feels the same?
—
The following novellas feature side characters from the main duet: Hedonist: King’s Heat and Hedonist: King’s Mate. Both novellas stand on their own, with a HEA for every featured couple. Both explore specific kinks and fetishes.