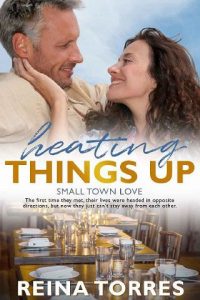 **This is an extended NOVELLA formerly posted in the “Not Over You” Anthology**
The first time they met it was the wrong time for both of them… Finding each other again, feels like a second chance at love.
Caroline Franzen fell in love with St. Raphael when she visited the Santini family there almost two years ago. She bought their microbrewery in Los Angeles and turned it into a gastropub that earned Two Michelin stars. Restaurants in the City of Angeles were more about hustle and flash than food and she wanted to take a step back from the rush and live in a real community.
She’s lived in town less than three years when she bumps into a ghost from kitchens past at the farmer’s market. Holy hotness.
Lucas Brierly spent a little over two decades as a celebrity chef traveling the world, opening more than thirty big name restaurants and earning enough awards to cover every wall in the first floor of his house. He decided it was time to settle down. He still loved being a chef, but he wanted to be a better father. He moved to St. Raphael to give his daughter a real home as she began high school. Finding Caroline living a stone’s throw away reminds him of what they’d almost had years ago. The two of them in a kitchen and in each other’s arms threw sparks enough to light up the sky.
Their old patterns of bantering in the kitchen are different now that they’re on even footing. Is it enough that they’re ready to take a chance on love, since they just can’t help heating things up?