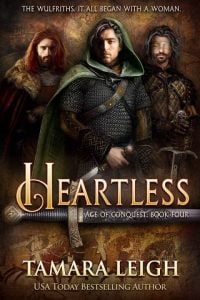 THE WULFRITHS. IT ALL BEGAN WITH A WOMAN
A battle. A crown. The conqueror. The conquered. Medieval England—forever changed by the Battle of Hastings. And the rise of the formidable Wulfriths.

Chevalier Maël D’Argent lost more than his striking looks when he aided the Duke of Normandy in taking the English throne from King Harold. As much by his own actions at the Battle of Hastings as those of the enemy, he lost his sire and his honor in breaking faith with his family. Believing himself unworthy of forgiveness, his ruined face the least due him, Maël now serves a ruthless man bent on subduing Saxons resistant to Norman rule. But when his mission to safeguard King William’s dignity leads to the rescue of a curiously familiar Saxon woman who causes the empty place inside him to strain its seams, he discovers he may not be as heartless as the one he serves—nor resistant to the wiles of one he ought to count an enemy.

In the guise of Abbess Mary Sarah, the illegitimate Mercia has served the Saxon resistance for years in anticipation of learning who sired her. At last ordered to cast off the habit and veil, Mercia is told that revelation of her parentage hinges on acceptance of another role that could see her sacrificed by the noble family who refuses to acknowledge her. When she resists and is abducted by Saxon allies, her savior proves the scarred Norman warrior who spared her following the great battle. Once more, something sorrowfully empty in Sir Maël makes her long to fill his emptiness with what little she possesses, even if his captivity renders it impossible for him to forgive one as deceptive as she. Even if she never discovers who she is…

From the coronation of William the Conqueror at Westminster, to the amassing of the Danish fleet intent on dethroning England’s Norman king, Sir Maël and Mercia’s tale unfolds in the fourth book in the AGE OF CONQUEST series revealing the origins of the Wulfriths of the bestselling AGE OF FAITH series.