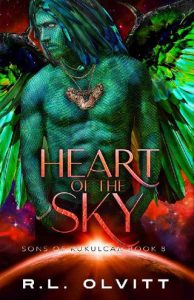 Heart of the Sky (Sons of Kukulcán #8) by R.L. Olvitt – Free eBooks Download

Adventure, knowledge, alliance: Melania Abbot is looking for all three when she walks aboard the ramp of the Xithilene ship the J’vinka’s Claw. The arrival of the same aliens on Mars approximately six months ago brought her career to a standstill, but as part of a human honor guard selected to celebrate the deepening bond between the two species and their planets, she hopes to reclaim some excitement and purpose in her life.
Lieutenant Xath has had his fill of human women. They may be fascinating and beautiful, but they only bring trouble—especially aboard a ship full of Xithilene warriors. Still feeling the sting of a recent rejection, he isn’t going to let their new crew mates get in the way of his duties. Unfortunately, with a prince at the helm, there’s been little enough adventure aboard the Claw, and when he learns of their next assignment, it doesn’t look as if that will change anytime soon.
Melania and Xath may both crave excitement, but they receive more than they wished for when it becomes clear there’s a saboteur aboard the ship. Tensions rise between the Xithilene and their human allies, and no one is sure who to trust as rumors fly and systems fail. When a routine scouting mission goes horribly wrong, Xath will find himself relying on the one human soldier he’s tried his best to ignore: Melania Abbot. They will need to work together if they wish to survive—and they soon learn their discoveries will prove vital to the survival of all Council species—but only if they can live long enough to tell anyone.