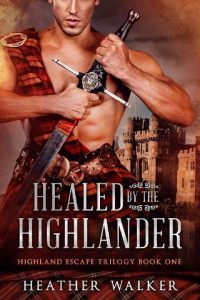 She wishes to escape her present, but can a handsome Highlander heal her past?

Sent to a psychiatric facility following the harrowing death of her sister, Marissa Lower longs for a better life.
When an opportunity for escape presents itself, Marissa grabs it. Chased by the wardens through the surrounding wilderness, she seeks shelter in nearby caves, unwittingly stepping through a magical portal to another time and place…
Leif McLaren, laird of clan McLaren is no one’s fool. Blessed with the superhuman strength of his clan, Leif is a force to be reckoned with. Though bolstered by the magic-wielding females of his clan, the threat posed by Clan McRuthvens’ sheer numbers is proving too much. Following the kidnap of his niece, Leif vows to rescue his kin and defeat McRuthven. However, he needs more power at his disposal and time is running out.
When a strange, flame-haired maiden appears from the local caves, terrifying away a rival clan, Leif’s prayers appear to be answered. Not only did the bonnie lass drive off the local scum, but she possesses magical powers rivaling the strongest females of his clan.
Captivated by the lass, Leif knows Marissa could be the difference between defeat and victory for the McLarens. But with her past troubling her and her new-found powers still raw, it could all be too little too late…