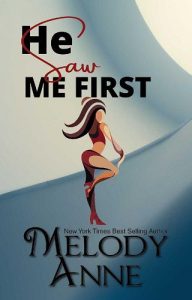 During the week, I’m a respectable bookstore owner in a small town with a secret no one could ever guess. On the weekends I do what needs to be done to survive. My secret has been kept for ten years . . . my time is up.

Cassandra Montana — once known as Tina Moore — had been the girl no one ever worried about. She’d been raised in a loving family in Washington DC where her father served in the White House, and her mother was a DC socialite. She’d been pegged as America’s Sweetheart from the first time she’d been photographed with a butterfly on her fingertip at the tender age of three with both of her parents behind her, their heads thrown back in laughter.
No one knew at that time the dark secrets that surrounded her world . . . not even her. She’d find out in a big way at the tender age of fourteen when the police break down the door of her mansion in the exclusive McLean neighborhood to find her holding a bloody knife with her father dead at her feet.
When Tina is freed from juvenal prison at the age of eighteen, her record wiped clean, she changes her name to Cassandra Montana, vowing to never think of herself as Tina again. She flees her old life in Washington DC, and goes to the furthest place she can find, which lands her in Ravish, a small town in Oregon along the McKenzie River. She does what she can to survive when she realizes her past might be wiped clean, but will always haunt her . . . she simply knows too much.
Greyson River prefers to be alone, not needing the complications of friendships, and especially not needing long-term relationships. He gets his needs met without emotional ties. He can tell within a few words the women he needs to steer clear of . . . but then he meets Cassandra and his life is about to become an endless rollercoaster ride. He’ll get in and out . . . at least that’s the plan. He has a job to do and once it’s done he can walk away from Cassandra and never look back . . .
The thing is, though, that life doesn’t ever go the way you want it to. These two should never have crossed paths, and when they do . . . a lot of secrets are going to come to the surface that many in power don’t ever want to see the light of day . . .