Home
contemporary romance
He Has Santa by Stephanie Queen (ePUB) 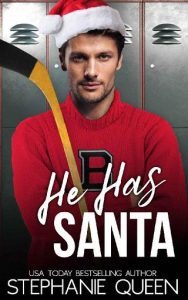 Little Nicky has a Christmas wish and it’s up to Junie and Logan to grant it.
Logan did his best to forget about the girl who ditched him before he left for college on a hockey scholar. He did his best to deny she was the love of his life because that possibility hurt like hell. Now he’s playing for the team he’d always dreamed of since he was a kid, the NHL’s Boston Brawlers. But there’s still a hole in his heart.
Junie never felt good enough to be the high school hockey star’s girl, especially when she caught him kissing her best friend. Or she could have been kissing him. But did it matter? He was the hottest guy in town and he’d be the hottest guy in college and then the NHL eventually.
It was inevitable that he’d find someone better than her, so she ran away.
And had his baby. Then married another man.
Six years later and Junie’s a widow, coming home finally, starting over. And so is Logan…