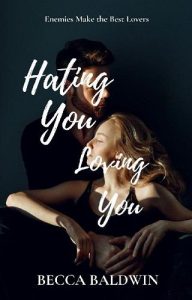 Hating You, Loving You by Becca Baldwin – Free eBooks Download

From the moment they met, Louelle Cordona has HATED Ryan Harper’s guts. Since the professional baseball-playing manwhore’s failed pathetic attempt to hit on her, just the sight of him leaves her fuming and ready to claw his eyes out. that is until he gives her a flash of her weakness. The world’s most perfect dimple. Lou is a SUCKER for a good dimple. One glimpse of that gorgeous indention and all that anger and hatred she feels starts to transform into something else. Something akin to attraction.
Ryan Harper loathes all things Louelle “Lou” Cordona. After sharing a plane with her back to New York, watching his younger brother hit on her and not strike out, as well as being tossed together at a New York Rangers’ game, Ryan can barely keep it together whenever she’s around. The woman irritates him. She likes like poison ivy. The more you itch, the worse it gets. Suddenly, she’s EVERYWHERE and he can’t stand it.
Out of the blue, Ryan is struck with an idea. Payback of sorts, if you will. After conning her pathetic waste of a date out of her phone number, Ryan is ready to put his plan into action! He’s more than ready to give Lou a taste of her own medicine and payback for irritating him… and making him want her more than he’s ever wanted any woman before.