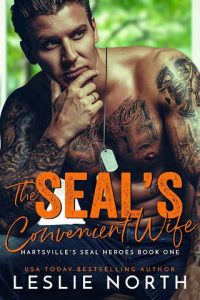 Get ready for a thrilling ride in this page-turning Leslie North trilogy featuring three tough-as-nails Navy SEALs facing babies and bad guys as they fall in love! Three exciting tales featuring Navy SEALs who find themselves facing fierce enemies, fake marriages, and instant families while they try to protect the women they can’t help but fall hard for.

In The SEAL’s Convenient Wife, Patrick Nelson proposes a fake marriage to his daughter’s kindergarten teacher to keep her safe from some shady characters and prove he’s a good father—and finds himself unexpectedly falling in love.

Navy SEAL Anderson Park and operative Violet DiPaula don’t get along, but after a night of passion they become parents—parents falling in love while on the run from a violent Russian adversary in The SEAL’s Surprise Baby.

In The SEAL’s Instant Family, Kenton Fitzpatrick thinks he has his future all planned out—until Mia Kingston, raising her orphaned twin nieces, comes into his life. When old enemies threaten, Keaton realizes he’ll do anything to protect them—even if it means losing his heart.