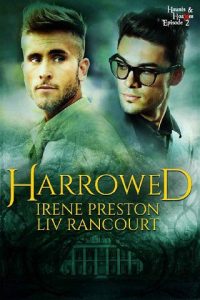 There’s nothing scarier than the truth…

Noel’s got issues. Like, he doesn’t know what to call his lover. Are they boyfriends? A fling that got out of control? Something more? Even worse, he may sometimes get waylaid by a random ghost or two.
Or else he’s losing his mind.
Now Adam? He’s stable and solid and warm; the kind of guy Noel never knew he wanted. He’s also the historian on Haunts and Hoaxes, which gives him a professional interest in Noel’s “special talent”.
When the ghosthunting crew turns up something weirder than normal at a Louisiana plantation, Adam convinces Noel to check it out. Instead of finding a haunt, they uncover a mystery. Noel used to be a cop and he grabs the chance to investigate something real. DNA is evidence. No matter what Adam says, the ghosts don’t prove anything.
But the past is done hiding and the spirits are going to have their say. Noel better figure out how to listen, because Adam’s job, their relationship, and even his sanity are at risk.