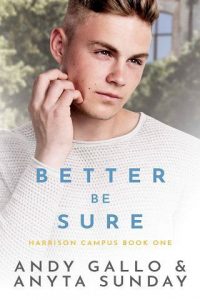 This box set includes all five books in the Harrison Campus series (four novels and one novella). These slow-burn, low-angst stories prove opposites do attract, and follow the emotional highs and lows of five couples falling in love and finding their HEA.

Better Be Sure: An Out for You MM Romance (Harrison Campus Book 1)
Jackson Murphy bet his legacy that he can bring a guy to his fraternity formal. The guy he loves, Ed Knowles, isn’t out and won’t come to the dance. Does Jack follow his heart or hold onto the last link to his deceased father?

Better Have Heart: A Rivals to Lovers MM Romance (Harrison Campus Book 2)
Isaiah Nettles counts on winning the Gage Scholar program to help his family. The only thing in his way is Darren Gage, the heir to the Gage fortune.
Darren Gage plans to become the Gage Scholar to win back his father’s affection. Then he meets the competition and things get complicated.

Better Be True: A Fake Boyfriend, Roommates to Lovers MM Romance (Harrison Campus Book 3)
Nico Amato is in love with his roommate. His all-American, jeans and t-shirt roommate who thinks Nico is too much. When Luke needs a fake boyfriend, does Nico refuse? Nope. He’s in so much trouble.
Luke DeRosa has it bad for his roommate. His flamboyant, oversized personality roommate who does everything big. They kind of guy who finds Luke boring. When Nico needs a fake boyfriend, Luke should refuse. How does yes come out of his mouth?

Better to Believe: A Brother’s Best Friends, Nerd/Jock MM Romance (Harrison Campus Book 4)
Coury Henderson has it all worked out: Pitch well his senior year, get drafted, play pro baseball. Falling for, Liam, his best friend’s super smart, younger brother, isn’t compatible with those plans.
Liam Wright has crushed on his brother’s best friend, Coury, since he was twelve years old. Not that he’d ever have a chance. Jocks don’t dig nerdy guys like him and Coury barely knows he’s alive. So why can’t he stop hoping for more?

Better For You: A Nerd/Jock, Forced Proximity MM Romance (A Harrison Campus Novella)
Charlie O’Leary agrees to work at the library before going home for Christmas. He needs the money. Staying with his secret crush, Evan, is a bonus. But hot, rich jocks don’t go for nerds like him.
Evan Turgon needs help. He has five days to finish a paper he can’t wrap his head around. Lucky for him, his cute, straight-A, fraternity brother Charlie is staying in the house. Too bad smart, cute guys always think he’s stupid.