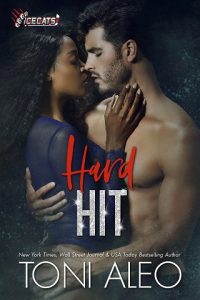 Kirby Litman has been abandoned by everyone in his life at one time or another since childhood. And when his cheating ex drops their baby girl in his lap and leaves the country, he vows he won’t abandon his daughter, Celeste, like he was. Between parenting, hockey, and mentoring three brand-new young players, he doesn’t have much time for himself. Though, when Jaylin Raventorn crosses his path again, he wants to stop the clock for her.

Jaylin has had her eye on Kirby from the first moment they met over a year ago, but his surprise fatherhood threw their plans into the penalty box. Now that he’s back in play—and with a cute new teammate to boot—Jaylin is as eager as Kirby to pick up where they left off.
But will the love-’em-and-leave-’em lawyer be able to let go of her fears to build a future with the man who’s always been left behind? Or will the hard hit from their pasts be too much for them to overcome?