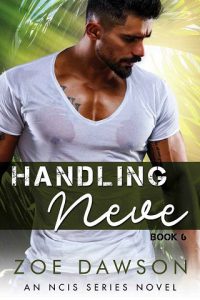 Petty Officer Neve Michaels, USCG stationed in San Diego, California broke her collar bone during a search and rescue gone bad—the guy was dead before she got to him. Three weeks after the rescue, someone breaks into her apartment and tries to kill her. She lets the police, her brother and her friends think it was a home intruder when she knows it was an assassin sent specifically for revenge. The guy she couldn’t save is part of a family of arms dealers and his oldest brother is now gunning for her and her whole family. Her mission is clear—neutralize the threat and take him out. But, before she can go on the offensive, Russell “Rock” Kaczewski happens. He’s too smart to believe her story and once he sees all her gear, he makes her spill the beans. It makes it even tougher that she’s deeply attracted to him, but no way does she want a long distance relationship. She’d experienced what it was like to have a loved one constantly gone since her dad is a crab fisherman up at Dutch Harbor, Alaska. Yeah, the best thing she can do is keep her hands to herself. But Rock is one huge, beautiful temptation.

Sporting goods store owner and former RECON marine, Rock has no intention of letting her go off to a foreign country to track down a gun runner alone. He just has to find a way to keep his hands off his best friend’s sister. Yeah, right, ignore all the signs that say Neve has a thing for him, too. Add into the mix the lady doesn’t want a long distance relationship and Rock is grounded in San Diego with his business. The hardest part of this trip isn’t the thick and dangerous jungle, the almost impossible op or the murderous weapon brokers—it’s the threat to their hearts.