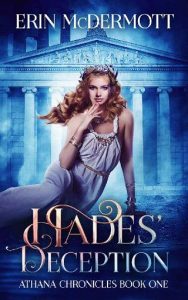 Simplicity was all that mattered to Claire, until an Ancient Greek god wreaked havoc on her life.
Claire Wild’s life is perfectly ordinary. Until she loses her only living parent, finds herself on the run from Hades, and is taken to an island of immortal beings all in one day.
While living on the island, Claire learns she is special. So special that the immortals of the island are determined to keep her safe from Hades’ wrath. But she doesn’t understand why.
Apparently, neither does Jason. When Claire falls for the sexy but tortured immortal she doesn’t know how to react. Until she realizes he is the only one on the island that doesn’t want to help her. In fact, he insists the immortals of the island shouldn’t help her either.
Now, Claire needs his support to remain safe from Hades. In order to gain it she must prove something not even she believes in. She must prove she is more than ordinary.