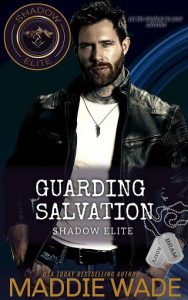 Born into a life of privilege and title, Bram “Bein” McCullum is the son of a Scottish Laird. Yet the deference and rules he has lived by his entire life feel like a straitjacket compared to the wild feeling in his heart that seeks freedom and the cool bite of purpose. When an incident with his family ends in his arrest, he feels his life is over—until a mysterious man offers him hope and a future he yearns for. With ten years of military service under his belt, he retires from the Army and takes his place in the Shadow Elite. With his life everything he ever wanted it to be he can’t understand the nagging doubt in his heart until he meets the wild Irish Mafia Princess who could be his destruction.

Aoife Doyle grew up as the princess of her father’s Irish Mafia reign but when he offers her hand in marriage to a man she hates, to forge the bonds that will stabilise his power, she runs. Fleeing her life and everything she knows Aoife finds herself in a tiny Welsh town with no money or food. Taking a job at a local pub she begins to put her life back together and regain some of her hard-won control. When a sexy man with a deep brogue and eyes she could drown in walks into her pub, she knows she’s in trouble, their chemistry is off the charts and the heart wants what the heart wants.

Just as Bram and Aoife are making a path for themselves the worst happens and the happiness they’d found is destroyed in a bloody carnage. Bram must now fight like never before to save the woman who makes him whole and holds his heart in her hands, but outside forces want only his death.

Will they survive the fallout, and will the prince finally get his princess?