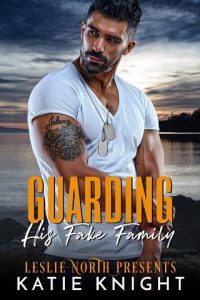 Former Navy SEAL and true crime author Simon Stone needs a break, not a girlfriend. After initial success with his first book, his reputation was smeared by a backstabbing ex and now he’s looking to redeem himself. Alisha Lewis, the sister of one of his former squad mates could be his ticket to his next bestseller. She’s sexy, smart and just happens to be an investigative reporter working on what might be the perfect story for his next book. A smuggling operation in a local auction house is intriguing, but so is Alisha. After the adrenaline rush of a stakeout gone bad, they share a night of passion, one they both agree was a mistake—especially after a cop buddy tells Simon that the story is all a fabrication by Alisha. But that one night of passion has lasting consequences when Alisha learns she’s pregnant.

Alisha’s life has certainly been better. She’d been on the cusp of exposing a major smuggling operation and now she’s pregnant and—thanks to Simon confronting her in the middle of the newspaper office—she’s been pulled off investigative stories. She’s got more than a bit of a grudge, so while she feels obligated to tell Simon about their little surprise, Alisha makes it clear that she doesn’t need his help. She didn’t expect him to insist on coming along to keep her and the baby safe. And she definitely didn’t expect to need his protection when they stumble on an abduction in progress. Soon, they’re up to their necks in crooked cops, kidnappers, and the kidnap victim’s abandoned baby. Not to mention the red-hot passion that continues to flare between them. It’s enough to give a girl fits. Worse yet? As they work to solve the mystery, Alisha realizes she’s starting to fall hard for the sexy SEAL. But will they be able to survive long enough to fall in love?

The bestseller Leslie North and Katie Knight invite you to indulge in a heart-pounding military romance with a hot, super-alpha Navy SEAL protecting the woman he loves at all costs…