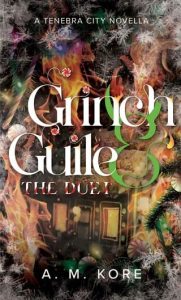 This Grinch & Guile duet contains two festive novellas in one collection — just in time for the holidays!

ALL IS CALM, ALL IS BRIGHT…
Well, the latter is true, but not the former.

Grinch & Guile: Part I
When a factory explosion rocks the wreath-lined streets of Tenebra City a mere few weeks before Christmas, you, a reporter for The Tenebra Times, are forced to work gruelingly long hours to cover the fallout. All you want to do is get back to your candy-making hobby to fully immerse yourself in the cheer of the Christmas season, and when the article is finally published, you feel so relieved that you could almost sing a Christmas carol or two.

Unfortunately, your writing isn’t up to the high standards of a certain mob boss whose gang is at the center of the allegations surrounding the hijinks. When he calls you a mere six days before your favorite holiday to demand a rewrite by Christmas Day, you get the sneaking suspicion it might take more than a few punch bowls full of eggnog to get through his twisted version of a season’s greetings.

Except there’s something about the elusive G. R. Inch that piques your interest. Nobody knows what he looks like, but the sweet tooth in you can’t resist craving the man whose pleasantly grating voice reminds you of the scrape of rock candy against your tongue…

You can’t help but feel there might be more to him than what the media depicts. Even if he is rather mean.

Grinch & Guile: Part II
Though it’s been a year since the elusive G. R. Inch has come into your life, you’re equally as stressed as you’d been 365 days ago. In a peppermint twist of events, it isn’t the grouchy mobster that’s playing Scrooge — it’s your boss.

The dour pixie isn’t happy with The Tenebra Tribune, your newspaper’s biggest rival, picking up the hottest headline of the coldest season. Yet again, you’re tasked with coming up with an article covering last year’s trial that’ll put you back in her good standings before Christmas Day. The looming deadline and hours of overtime with no progress to show quickly sour your beloved candy canes, and you officially find yourself in a Merry Crisis.

To save your job, you set your sights on the elf gang at the center of the trial, but the overprotective Mr. Inch isn’t happy about you getting too close to the fire. Still, you’re determined to prove that you’re much more than just a reporter with a sweet tooth and an eye for festive socks…