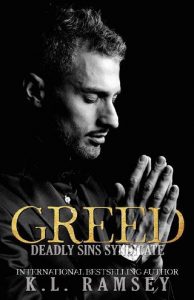 Darcy Wrath needed one thing—a husband. Her father’s refusal to accept anything but the old ways had landed her in a predicament that would take away everything that she had worked for. She was slated to take over the Wrath Syndicate, but a woman couldn’t be head of household without a husband by her side. When her father insisted on preserving that tradition, she had no choice but to find herself a man. That was where Rock Greed came in. He’d be the ultimate slap in her father’s face, being one of his oldest friends, and the head of the Greed Syndicate. Sure, he was twice her age, but that didn’t matter to her. If Darcy’s plan worked, she’d have everything she was working so hard for, and so much more.
Rock Greed thought for sure that he was being pranked when Darcy Wrath showed up at his door, insisting that he marry her. The least he could do was hear her out, and damn if she didn’t make some sense. But, to marry her, he’d have to be over his dead wife, and even after eighteen years, he wasn’t. Darcy was right, marrying her would only build on the alliance he had already started with the Envy, Pride, and Lust families, but he wouldn’t betray his dead wife’s memory.
Sending Darcy away was the second hardest thing he had ever done, but letting her go was smart for both of them. He couldn’t be the man that she was asking him to be and anything less would be unfair to the sexy, little hellcat.