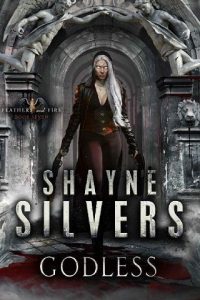 Slaughter is the best medicine.

Callie Penrose is back to murder vampires and chew bubblegum. And she’s all out of bubblegum.

Callie has had a rough few days. Five minutes after discovering she had a Godfather, she learned that the future of the world depended on the two of them taking an immediate road trip.

To Castle Dracula—a place even the supernatural community believed to be an urban myth, dead and abandoned long ago when Dracula had perished at the hands of Van Helsing, Mina, and Jonathan Harker.

Except…Dracula and his castle were alive and well. Worse, he had been secretly running the Sanguine Council—the governmental body of every vampire in the world—ever since his alleged death, with none the wiser. Not even the vampires.

And Callie’s first Godfather-daughter dance was to go assassinate the Sultan of Suck once and for all.

But she soon learns that Dracula is the absolute least of her concerns. And that some bonds should never be forged. Because once made, they can never be broken…

Callie Penrose is about to show the world fear in a palmful of blood.